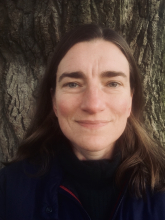 My best friend's mum recommended I learnt to meditate when I was 17. The South London Buddhist Centre was at the end of my street, and it was free, so I thought I'd give it a go. We were introduced that first evening to the Metta Bhavana meditation, and I found myself deeply moved by the possibility of developing a mind of love, and that this group of people would spend their Tuesday nights doing so.

In 1997 I went to Leeds University to study Philosophy and Religious Studies. I helped run the University Buddhist Meditation Society and in my holidays I worked in the Evolution shop in Sheffield. When I graduated in 2000 I moved to Sheffield full time to live in a community and work at Evolution. I was Ordained in 2004, when I was 26, and started to work for the Sheffield Buddhist Centre. I loved Sheffield and really enjoyed being one half of a Mitra Convening duo with Moksalila.

I used to come to Tiratanaloka three times a year as a satellite team member, and on one of those visits I was asked if I would consider moving here. I had a good life in Sheffield, but I knew moving to Tiratanaloka was the right thing to do. I moved here in 2011, and I haven't regretted my decision. I get a lot from working and living with a Buddhist team and I enjoy getting to know the women on retreats. My main enthusiasms are Dharma study, devotional practice, meditation (especially the Going for Refuge and Prostration Practice), Qigung, and going for runs in the beautiful countryside that surrounds Tiratanaloka. I am also Chair of the India Dhamma Trust which raises money for Dharma work in India.  I am inspired by the life and work of Dr Ambedkar - who saw the potential of Buddhism for transforming society.